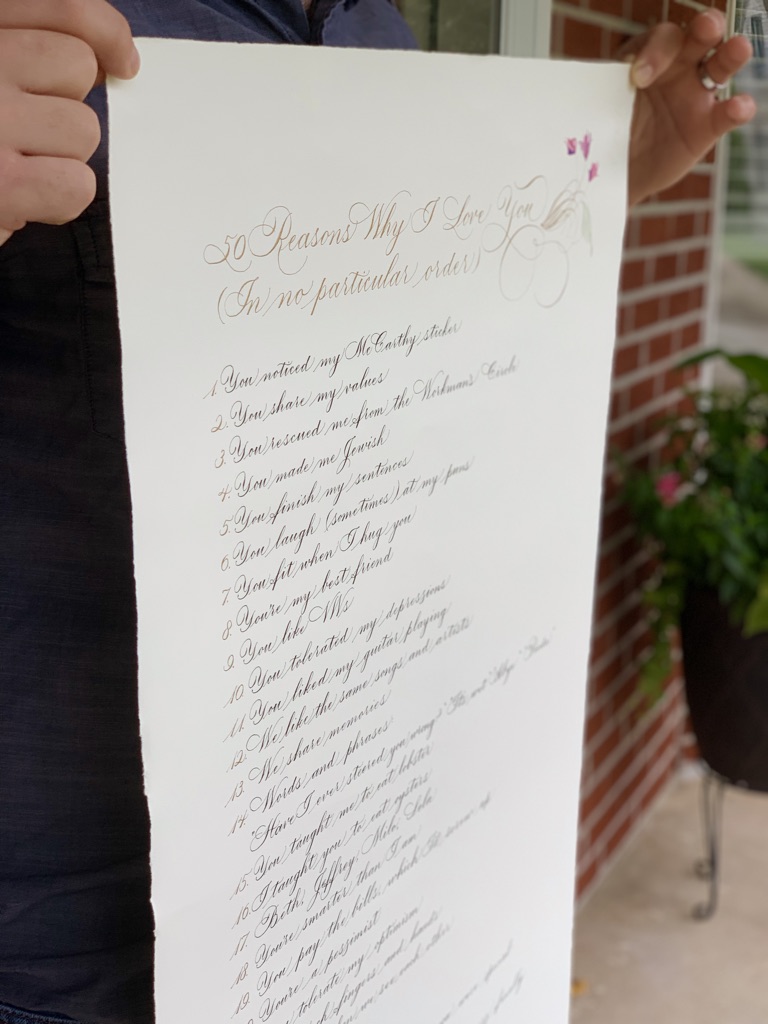 I know, I know… as an artist, you’re not supposed to pick favorites from the client commissions you’ve been hired to complete. Same with teachers who aren’t supposed to choose their favorite students, or designers who aren’t supposed to have a favorite item from the newest collection. You’re supposed to love them all. But, here’s the secret – *whispers* ahem, we all pick a favorite. So, the secret’s out. Oops. In this blog, I’m describing my favorite meaningful gift I’ve ever created, why I loved working on it, and tips for creating something equally special for someone you love. Read on, but keep the secret to yourself, mmk?

The inquiry that gave me all the feels

Last spring, I received an email out of the blue, that was short and sweet, but described a meaningful gift a man wanted to give his wife. I melted.

I am writing to inquire about your services. My 50th wedding anniversary is [DATE REMOVED] and I’d like to give my wife a “list of 50 reasons why I love you.” My preference is to produce this as a scroll which we may later frame. Sound like something you’d be interested in doing? Let me know.

Yes, of course it was something I was interested in doing! So, after some back and forth, we determined I’d be a good fit to work with him on his anniversary gift. He had been drafting the text for weeks before reaching out to me, and their anniversary was a bit over a month after his inquiry date, so he was well-prepared for this occasion.

The takeaway tip here: If you know you have a big milestone coming up, do what my client did and prepare for it! Last-minute gifts are always a tad lackluster. Presenting someone with a gift that’s not only heartfelt but took time to create shows how much you value him/her. Thoughtfulness shows, through your preparedness. 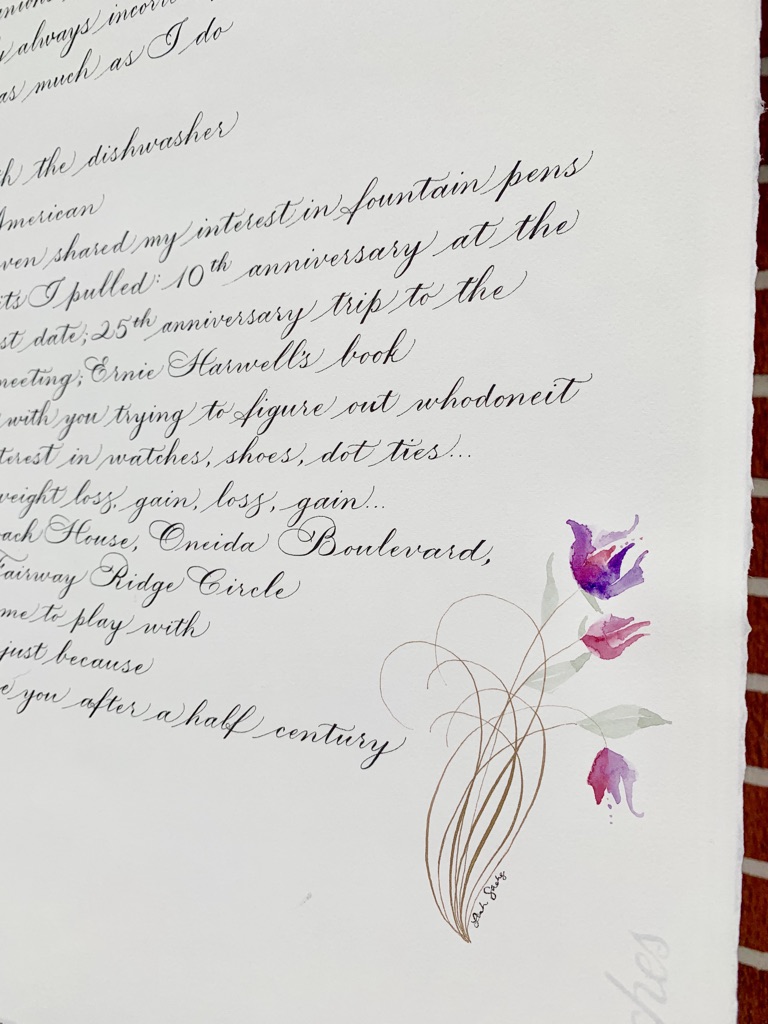 The trust in me to do my thing

As I mentioned, this client’s initial inquiry was brief. After I learned a bit more from him, he was open to my creative suggestions on layout, setup, and style. He trusted me to do my thing, which felt great as an artist. My first thought with his text was to have the text itself (each reason) written in black, with numerals added before each one, written in gold ink. This helped commemorate and honor the “gold anniversary” for 50 years and the traditional gift associated with it. He loved this idea and let me run with it.

I did these numerals in gold, but then as a surprise for him, I also did the main heading/title in gold ink, and added some gold and watercolor flourishing to complete the design. It turned out prettier than I had even thought when I first came up with the base idea. The additional touches came to me while I was working on the piece, and I knew I had the creative freedom to riff on the initial proposal a bit – that flexibility made his meaningful gift even better, visually.

The takeaway tip here: Know what you want and express that to the artist you’re commissioning. But then, let the professional take it from there! Chances are good that your micromanaged idea for ann artistic element won’t be quite as great as what (s)he’d come up with solo. No different than me micromanaging my accountant would end up in disaster – I’ve hired the professional for a reason! 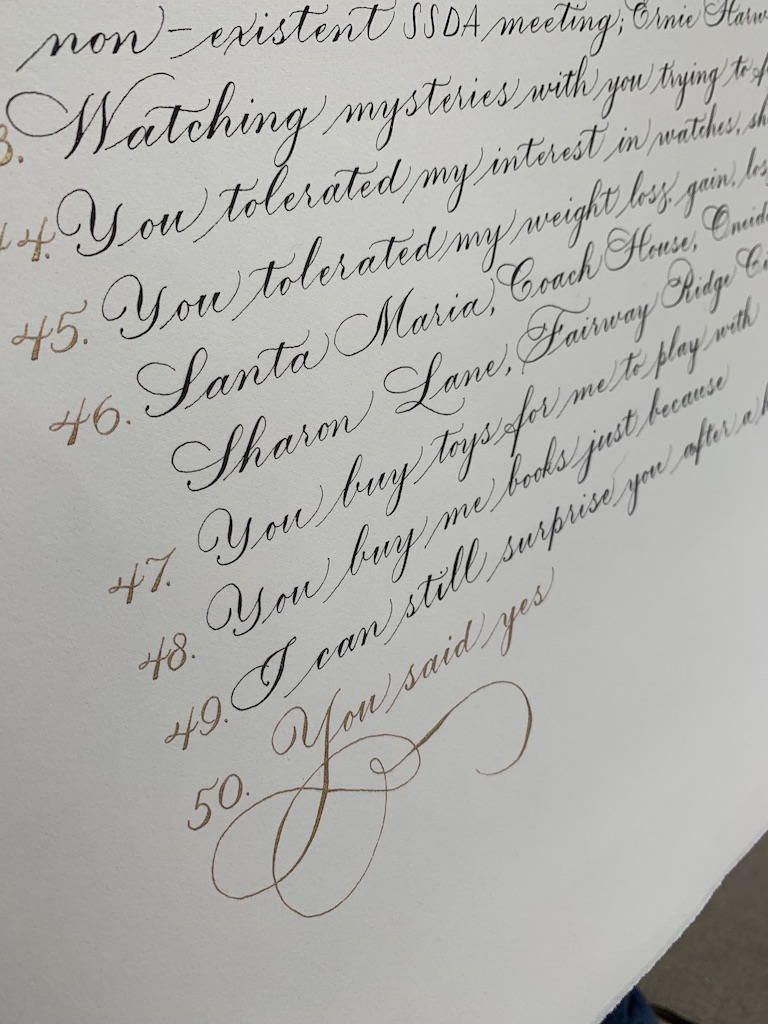 The meaningful gift started with his heartfelt message

This is the most important aspect of gift-giving when it comes to heirlooms: he started with something beautifully significant. His “50 reasons” were incredible. Some were serious and deep, others were more playful, and others were clearly silly inside jokes. All 50 would have been incredibly meaningful for him and his wife – and only the two of them. What a beautiful tribute to a half-century of marriage together! I wept as I read his text for the first time via email, again as I did the drafts, and more putting together the final version. I’m honored whenever someone entrusts me with something deeply personal like this.

“49. I can still surprise you after a half-century. 50. You said yes.” Ladies and gentlemen, that’s how you honor your partner. And that’s how you have your calligraphy artist in a puddle of emotions at her drafting table. But I digress.

The takeaway tip here: A meaningful gift starts with your meaningful subject matter, whether that’s your vows, a love letter, a favorite poem in your relationship, a scripture passage that resonates with the two of you, or even a saying your family says together. I’ve lettered all of this because they’re significant to my clients. Likewise, I’ve lettered Jay-Z lyrics because they mattered to the couple. Visually, the same applies: what matters to the person? An image of your home, your dog, the wedding bouquet she carried – it all works, as long as it is meaningful for the recipient.

So, when I received an email from him a little while after their anniversary, I was tickled. His wife loved the artwork, and they had displayed it in their home after custom framing it.

As promised, I’m sending a picture of your wonderful work framed. It’s a lousy picture but I think you can see how well this turned out. I am very grateful for your efforts…it was very well received. 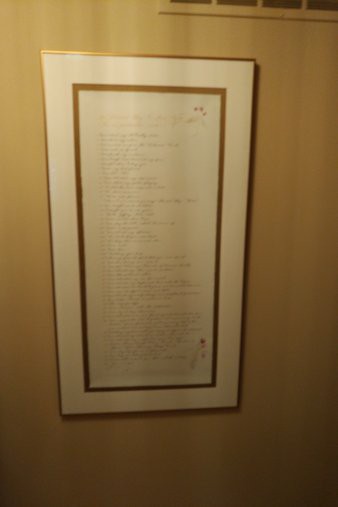 This gift has been my favorite meaningful gift I’ve created. Honestly, my client’s words had a lot to do with it – they were so beautiful, and the momentous occasion of a 50th anniversary really struck a chord with me. In addition, the large format (40 x 18″) piece was a showstopper, which is always cool!

Aside from that, here are the tips from this favorite commission to help you with your meaningful gift: 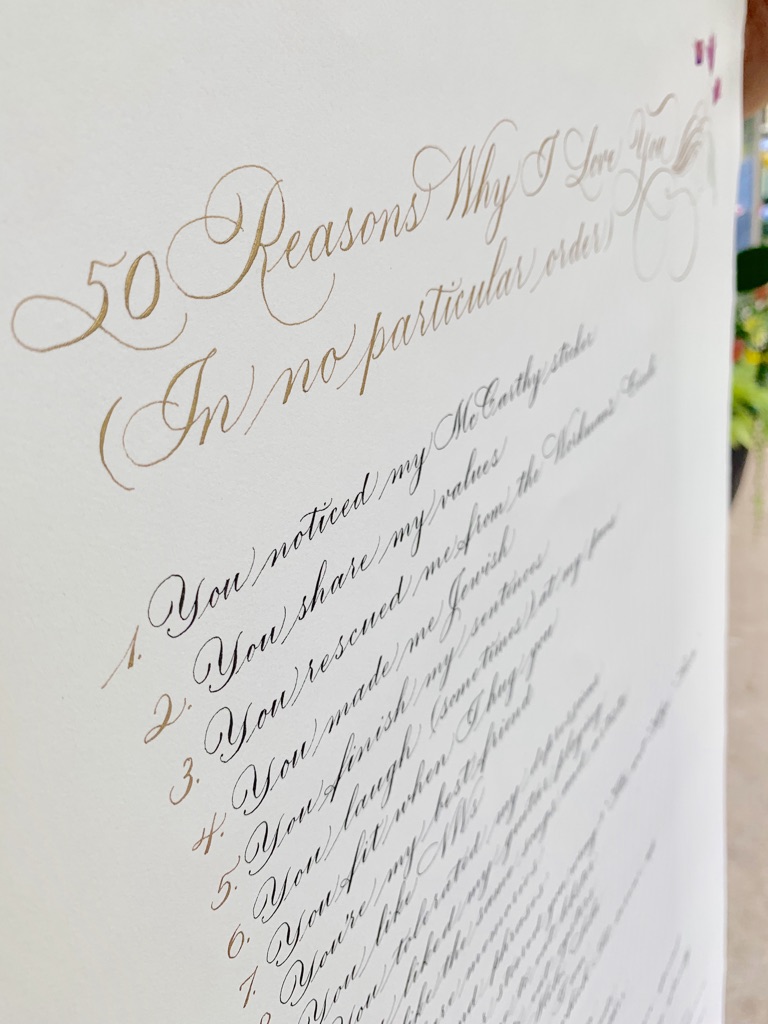 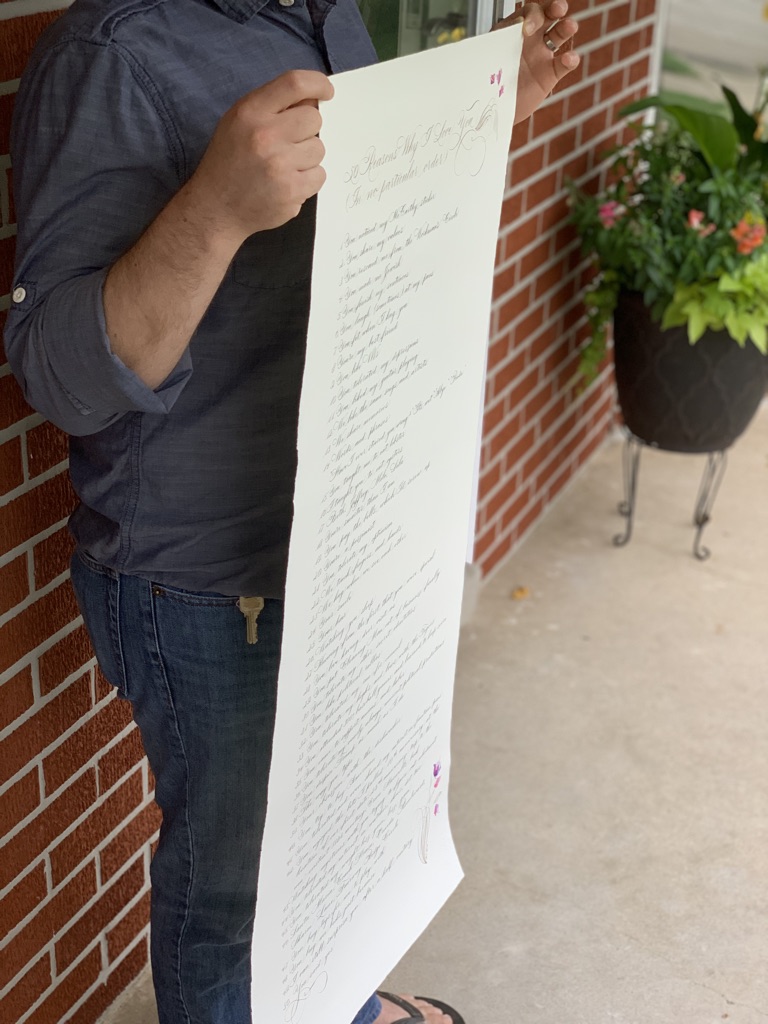 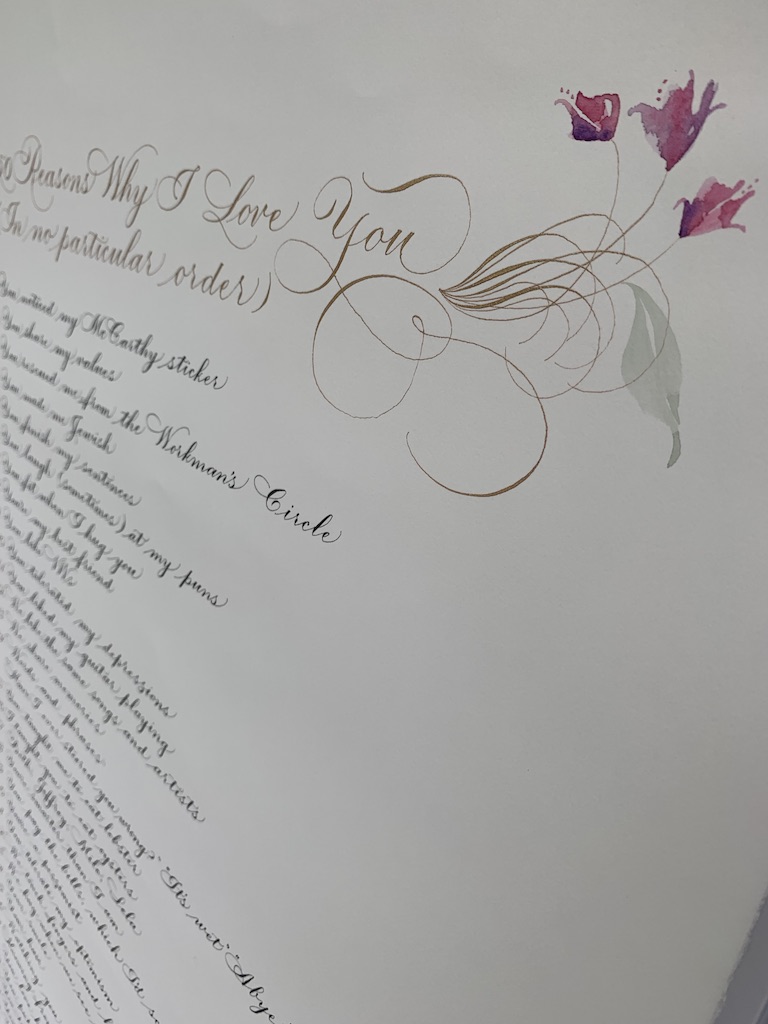 I hope you’ve found these tips helpful as to why this particular meaningful gift commission has been my favorite! If I can be of help with your gift-giving needs, please reach out. Give an heirloom – she doesn’t want another perfume bottle, anyway.

As a reminder, I’m donating 20% of all gifts purchased until April 30, 2020 to the PPE and Wellness Supply Fund for Detroit Receiving Hospital’s Emergency Department, in the wake of coronavirus. 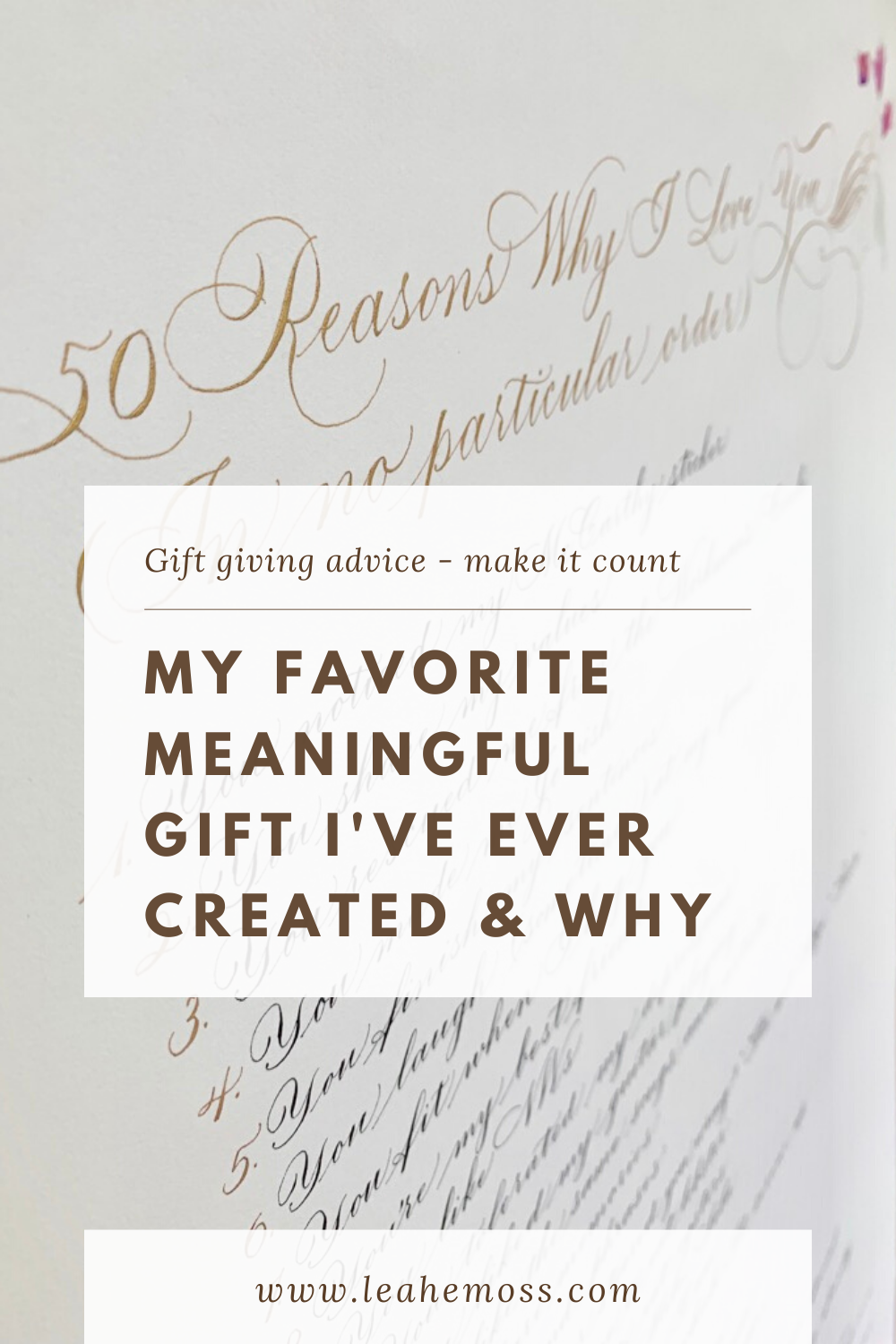 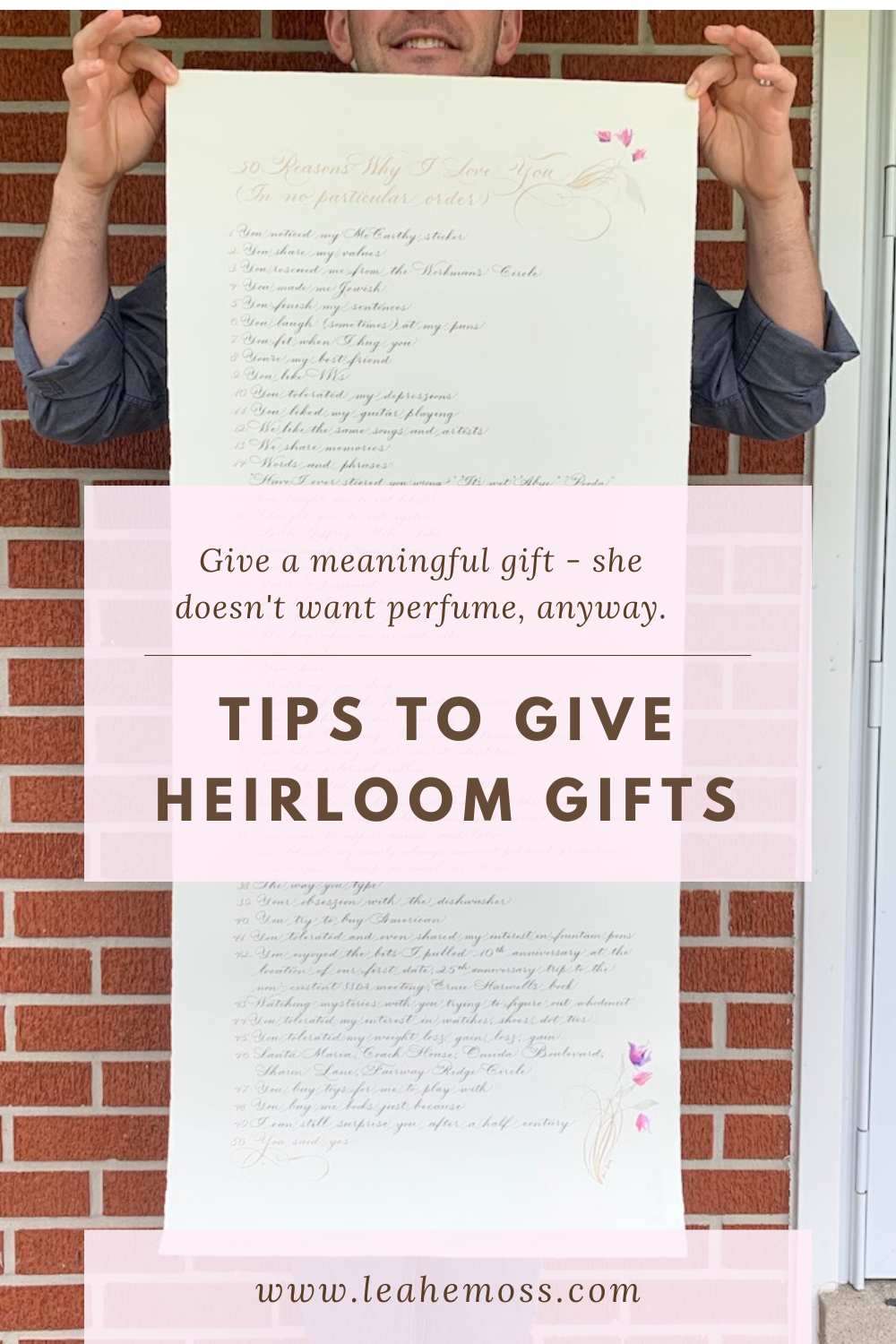